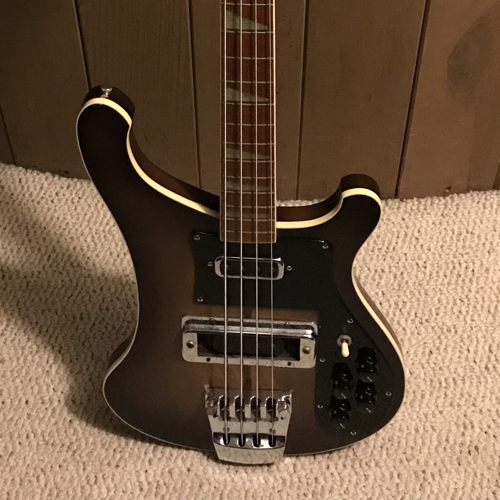 One of my favorite basses in my collection is a 1976 Rickenbacker 4001 in the somewhat rare Autumnglo finish. I bought it used in 2002 – I even have a picture of it hanging in the window of Cambridge Music before I bought it:

I saw it, couldn’t stop thinking about it when I got home, and went back the next day to buy it. This was before the boom days of crazy prices for vintage Rickenbackers – within the next couple of years prices practically tripled! The guy in the store noticed most of the fret wear was on the first 5 frets and guessed that the previous owner must have been in a punk band. I’m not so sure, as the finish is in pretty good condition – he must have played quite a bit to put that much wear on the frets, but at the same time the bass was not abused (well, a little bit, more on that later) and must have spent most of its life in a case under the bed. I vaguely remember being told that I may have been the third owner.

I was able to use this bass a lot the year I bought it – I co-founded a band called Zodiac Mambo with my old Jiggle the Handle cohort Gary Backstrom on guitar and vocals, former Max Creek drummer and one of my best friends Greg DeGuglielmo (he also played in Jiggle for a while), and Max Creek keyboardist Mark Mercier. I also began my hieronymous project that year, and this bass made it on to some of those early recordings. 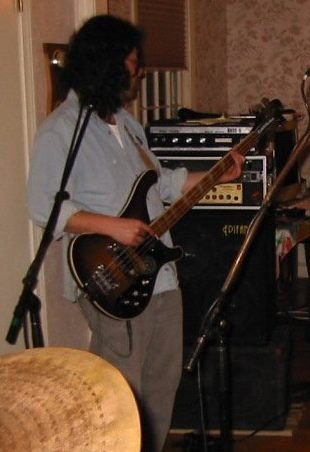 I only ever had the bass worked on twice that I can remember – once by Jon Mouradian when I first got it, and again by Paul Wilczynski about five years ago. Most recently I used it to play the bass on “The Man in the Mirror of the Book” by No More Leroy. While recording that track, I discovered that it was buzzing terribly – I had to keep my pinky anchored on the metal pickup surround the whole time I was playing – I can’t believe I was able to do it! But that was only a temporary solution, I needed to have it fixed properly.

Recently someone was making “tribute” versions of famous and/or interesting Rickenbacker basses, like Cliff Burton’s modded red 4001 or Geddy Lee’s Jetglo 4001. It was Sterling Fuentes, and I found his shop, Sterling Instruments, on Reverb. Turns out he is in the San Francisco Bay Area where I am! So I contacted him and he agreed to take a look at my Rickenbacker and do some much needed maintenance.

One of the craziest things about this bass was that the Rickenbacker-O-Sound output jack had a bolt in it! 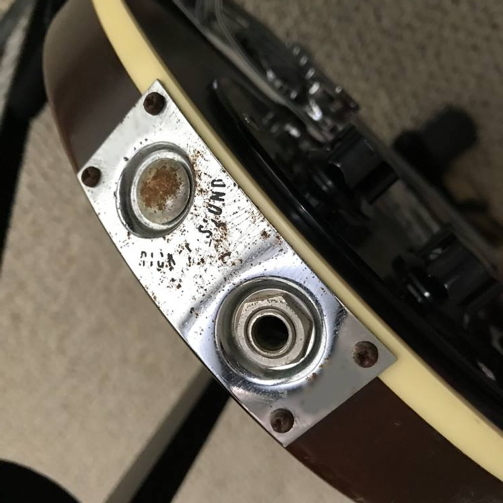 There was no way to pull it out, but he found that fortunately there was a nut on the other end: 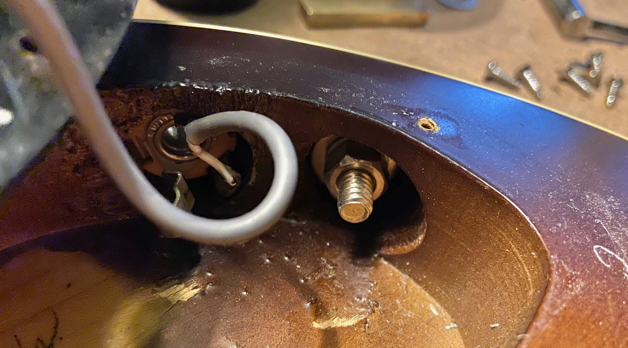 Here it is the way it should be – can hardly wait to try it out in stereo! 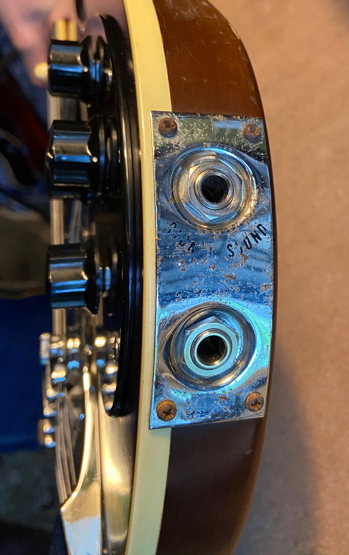 He also addressed the buzzing – in fact, he found that in addition to the bolt blocking the Ric-O-Sound jack, the bass had been rewired. So he put it back to the original specs and grounded it, but found it to still be a little noisy, so he put copper foil inside to help shield it from electrical interference. 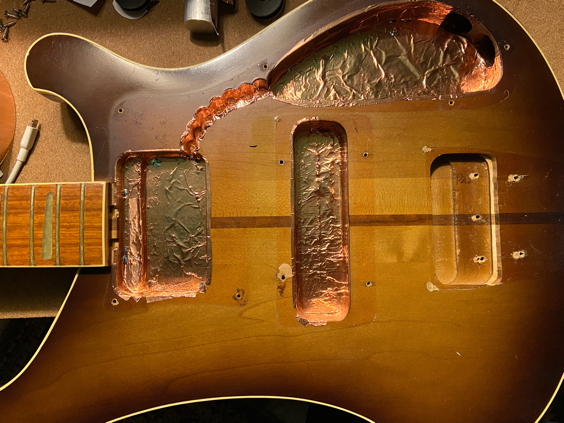 Finally, the bass was also starting to get the dreaded “tail lift” – Rickenbacker used a material that can’t hold up to too much string tension. I’ve had it strung with DR Lo-Riders, but finally decided to go with the lower tension Hi-Beams. I was considering switching to either a Hipshot replacement bridge or the new Rickenbacker design, but Sterling bent the tailpiece back a bit, and now with the lower tension strings it should be good for a good long time!

When I got it home I recorded a bit. One of the things I did was a solo version of a tune called Nova Aldo that was originally a spontaneously improvised piece with drummer Greg DeGuglielmo. Here’s the new version (with overdubbed Moog Sirin synthesizer):

And here is the original:

Thank you Sterling for bringing this bass back to life!

In case you want to hear this bass through the years, here is a playlist with stuff I have recorded with it from the most recent track to the earliest, including everything I mentioned in this post: